Although any degree of Secondary mitral regurgitation (SMR) is known to further complication heart failure symptoms and mortality, a treatment paradigm for patients with mild and moderate SMR is lacking.

The purpose of this investigation was to determine the effects of percutaneous mitral annuloplasty on symptoms, walk distance and left ventricular (LV) structure and function in patients with mild or moderate secondary mitral regurgitation (SMR) in heart failure with reduced ejection fraction. A total of 68 patients from all Carillon trials with mild and moderate SMR were analyzed in a retrospective study of 1 year outcomes.

The authors conclude: “Among patients with symptomatic HF and mild or moderate SMR on guideline-directed medical therapy, percutaneous mitral annuloplasty was associated with improvements in symptoms, SMR, a stabilization of LV structure and function, and high survival rates.”

Although COAPT was successful, MITRA.fr was not. The prevailing theories as to the difference in the trials is the amount of left ventricular dysfunction in enrolled patients. This is a pooled analysis of patients with functional MR and severe LV enlargement (LV end-diastolic diameter > 65 mm) who were treated with GDMT and the Carillon device vs GDMT alone – i.e., MITRA.fr patients. Key outcomes of this analysis were changes over 1 year of follow-up in mitral valve and LV echocardiographic parameters, functional outcome, quality of life, mortality, and heart failure hospitalization (HFH).

In conclusion, “In patients with functional MR and severe LV enlargement, the Carillon device improved mitral valve function, LV morphology, and functional outcome compared to patients receiving GDMT only. Preoperative LV dimension should not be a limiting factor when evaluating patient eligibility or anticipated response to therapy with the Carillon device.”

This article addresses the millions of heart failure patients worldwide that have a significantly increased risk of mortality because of functional mitral regurgitation (FMR). The article goes on to discuss the extensive clinical experience available for the Carillon device in treating FMR, advantages of the Carillon approach over alternative therapies, and highlights numerous patient groups that could benefit from treatment with the Carillon device. The authors conclude:

*Original article published in the March 2021 edition of CATH’LAB. The article summary above has been translated from the original French publication with the assistance of machine translation (DeepL).

Functional outcomes with Carillon device over 1 year in patients with functional mitral regurgitation of Grades 2+ to 4+: results from the REDUCE‐FMR trial17

Patients with heart failure often have impaired physical function and reduced quality of life (QoL). Therefore, improving QoL by a minimum clinically important difference (MCID) is an important measure of the effectiveness of heart failure management.

This recently published paper is a rigorous analysis of the REDUCE FMR trial, focusing on the intended patient population based on core-lab adjudication*. It shows convincing 12-month results for the only sham-controlled randomized blinded study ever conducted in heart valve treatment.

The authors conclude: “The patient population in this subgroup of those enrolled in REDUCE‐FMR (EROA, 0.31 cm2; LVDD, 66 mm) resembles that of the MITRA‐FR trial and is more generalizable to patients with HF and moderate to severe FMR. However, unlike the MITRA‐FR trial, our results show a trend towards improvement in patient‐centred outcomes with the Carillion device. In fact, the low NNT for all patient‐centred outcomes suggests that the Carillon device is likely to provide benefit in a large proportion of patients with FMR, rather than just a small subset. Furthermore, unlike the COAPT and MITRA‐FR trials, the REDUCE‐FMR trial used a sham procedure in the control group, which increases the reliability of its results by minimizing placebo and nocebo effects.”

*The intended patient population analysis was conducted to assess functional outcomes of patients with heart failure with reduced ejection fraction and moderate to severe (Grades 2+ to 4+) functional mitral regurgitation (FMR) treated with the Carillon device or control. Since 29.7% of patients were enrolled with only mild core-lab adjudicated MR grade 1+, this analysis focused on the intended patient population of the REDUCE FMR Trial with inclusion criteria of MR grades 2+ to 4+.

The Carillon device is feasible in HFpEF patients with aFMR and is associated with significant reductions in MR.

In conclusion, this comprehensive meta‐analysis of individual patient data has shown that the CARILLON device provides statistically significant and clinically meaningful benefits in LV volumes, NYHA functional class and indexes of mitral valve performance, along with a reduction in the rate of subsequent HFH. 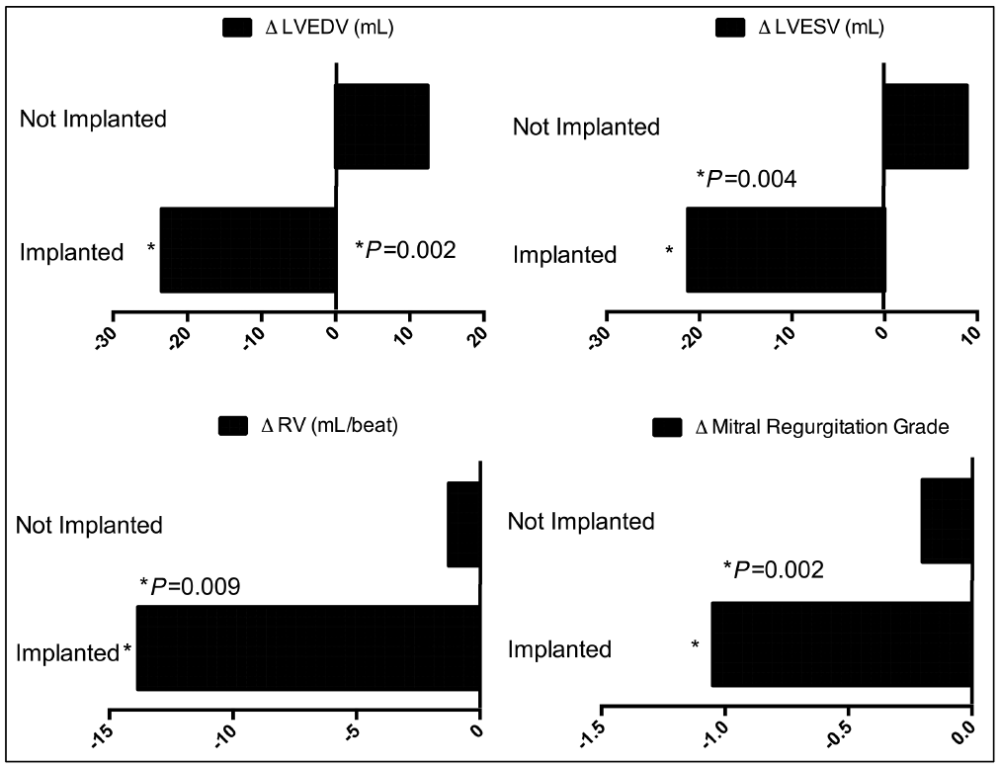 Embracing secondary mitral regurgitation with Carillon: past, present, and future15

In this editorial Dr. Lainscak and Professor Böhm discuss the optimal management strategy for patients with Functional Mitral Regurgitation. There is a need in the therapeutic spectrum for additional therapies that are safe and can be deployed as an early intervention to reduce the need for repeated hospitalizations. The data presented by Gialluria et al. supports the use of the Carillon Mitral Contour System to achieve this goal. Owing to less invasive approaches, favourable effects on left ventricular volumes, and possibility of step‐wise upgrade with other interventions, Carillon could be considered early in the patient trajectory for a timely and effective management of heart failure patients with reduced ejection fraction and functional mitral regurgitation. 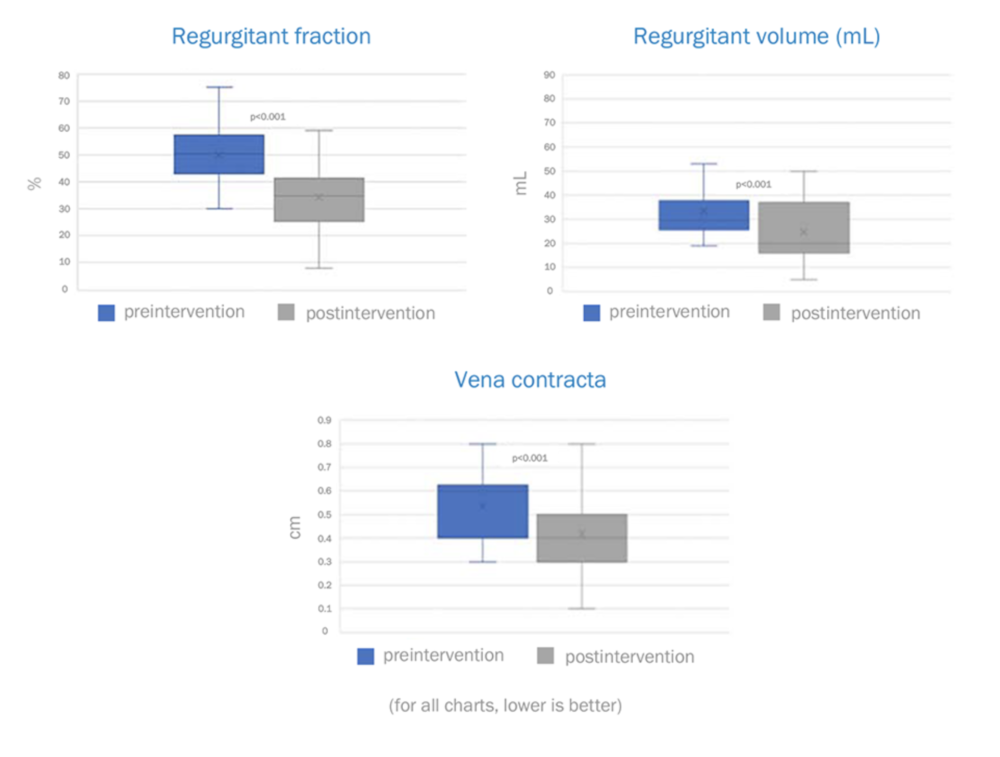 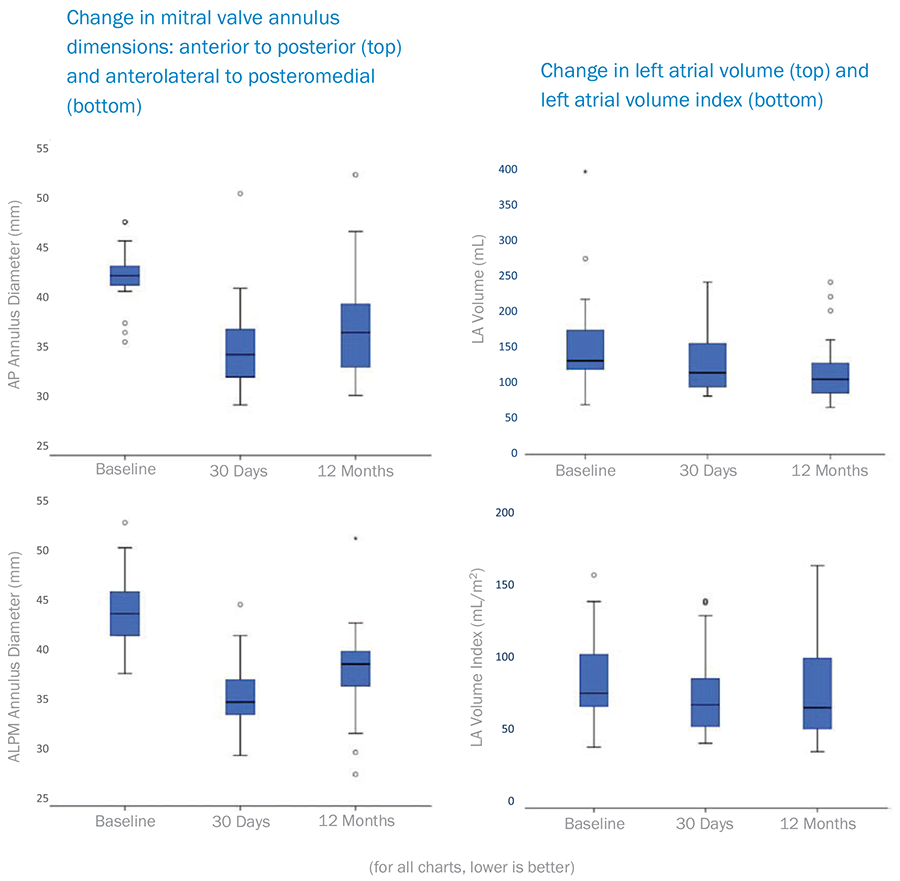 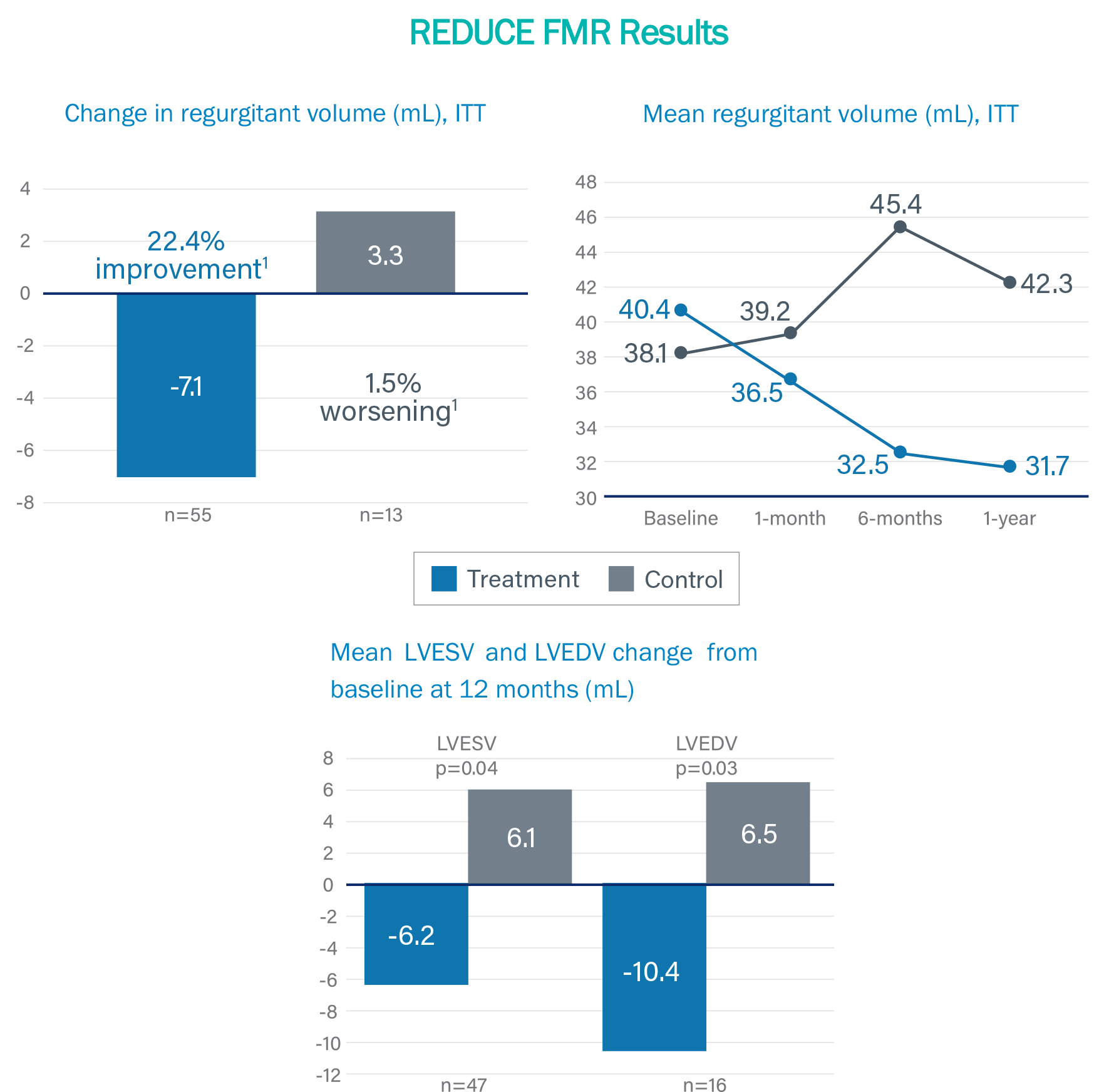 This analysis showed that Carillon addresses FMR and, in as little as one-month, successful implantation results in left ventricular reverse remodelling and increased systolic performance. Mitral tenting area is an important baseline parameter in predicting treatment efficacy with Carillon. 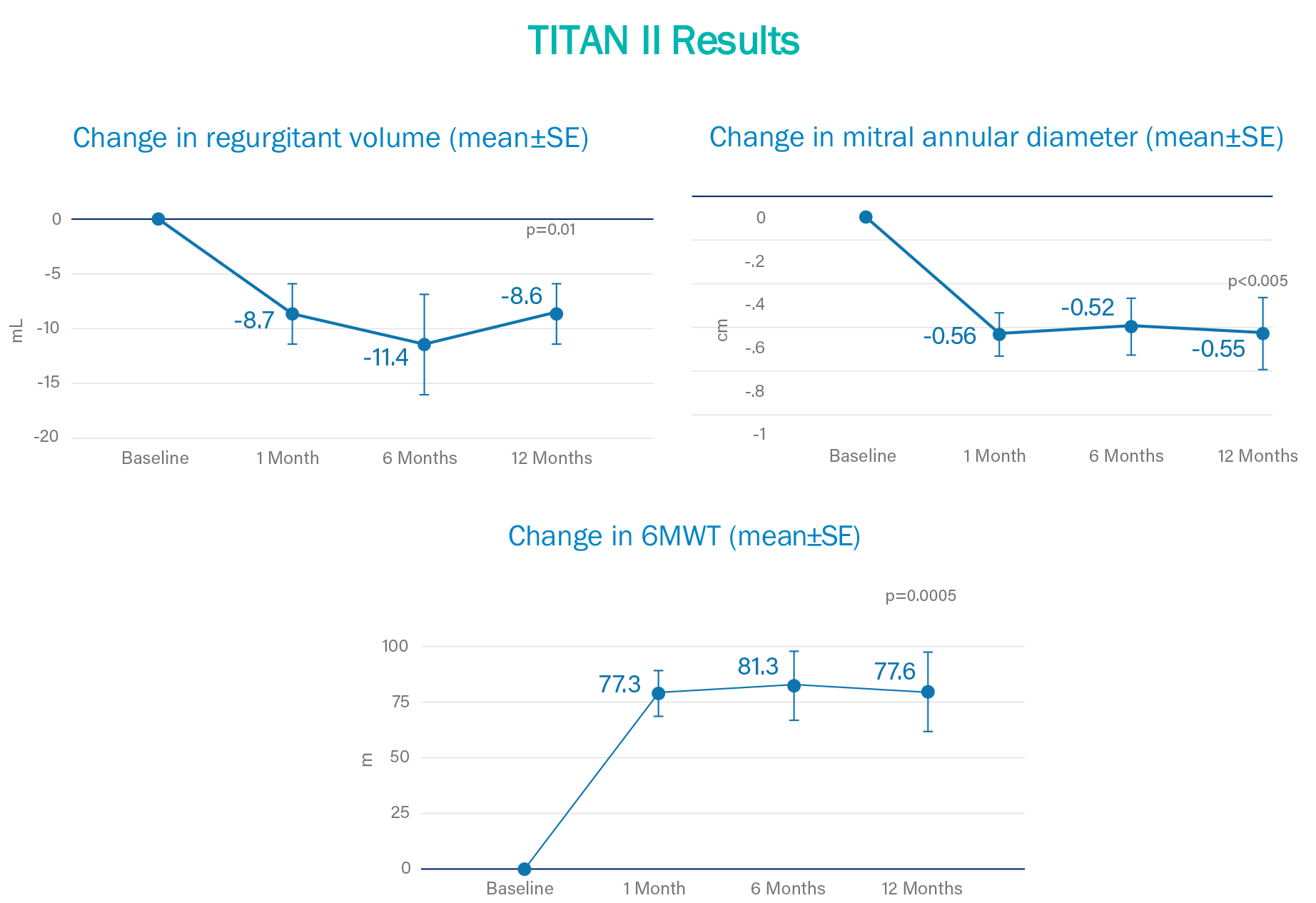 TITAN II was a single-arm study designed to assess the safety and efficacy of an updated version of the Carillon system. Inclusion and exclusion criteria were similar to those in TITAN. Patients had symptomatic congestive heart failure (NYHA class ≥2), MR grade 2+ to 4+, a dilated LV (LVEDD >55 mm) and an ejection fraction <40%. Quantitative assessments of MR were performed by an independent core echo laboratory, and MAE were reviewed by an independent data and safety monitoring board. In total, 36 patients were enrolled; 30 received a permanent implant.

This study showed that potential coronary artery compromise can be managed safely and effectively in all patients with 95% successfully implanted.

In patients with severe heart failure and mitral regurgitation, Carillon can be successfully used as a first line medical device intervention.

The TITAN study met its endpoint and showed the Carillon device can significantly and safely reduce FMR severity in heart failure patients, resulting in significant favorable reverse LV remodeling over 12 months and improved measures of clinical outcomes over 24 months.

The TITAN study was a prospective, non-randomized multi-center European study. The objective of the study was to determine if the Carillon device could safely and effectively reduce FMR and yield a durable long-term clinical benefit. Follow-up included typical clinical and echo assessments through 1 year and implanted patients had an additional clinical follow-up assessment at 2 years. The study was rigorously conducted with oversight by independent parties including an echo core lab, clinical events committee, and a data and safety monitoring board. Key inclusion criteria included MR grade 2+ to 4+, NYHA Class II-IV and LVEF <40%.

Of the 53 patients enrolled in the study, 36 underwent permanent implant of the device. In 17 patients, the device was recaptured (due to transient coronary impingement (n=8) or <1 grade FMR reduction (n=9). These non-implant patients were followed as a comparator group.

The first-in-human AMADEUS study met its endpoint and demonstrated successful deployment of the Carillon device and a significant reduction in FMR. 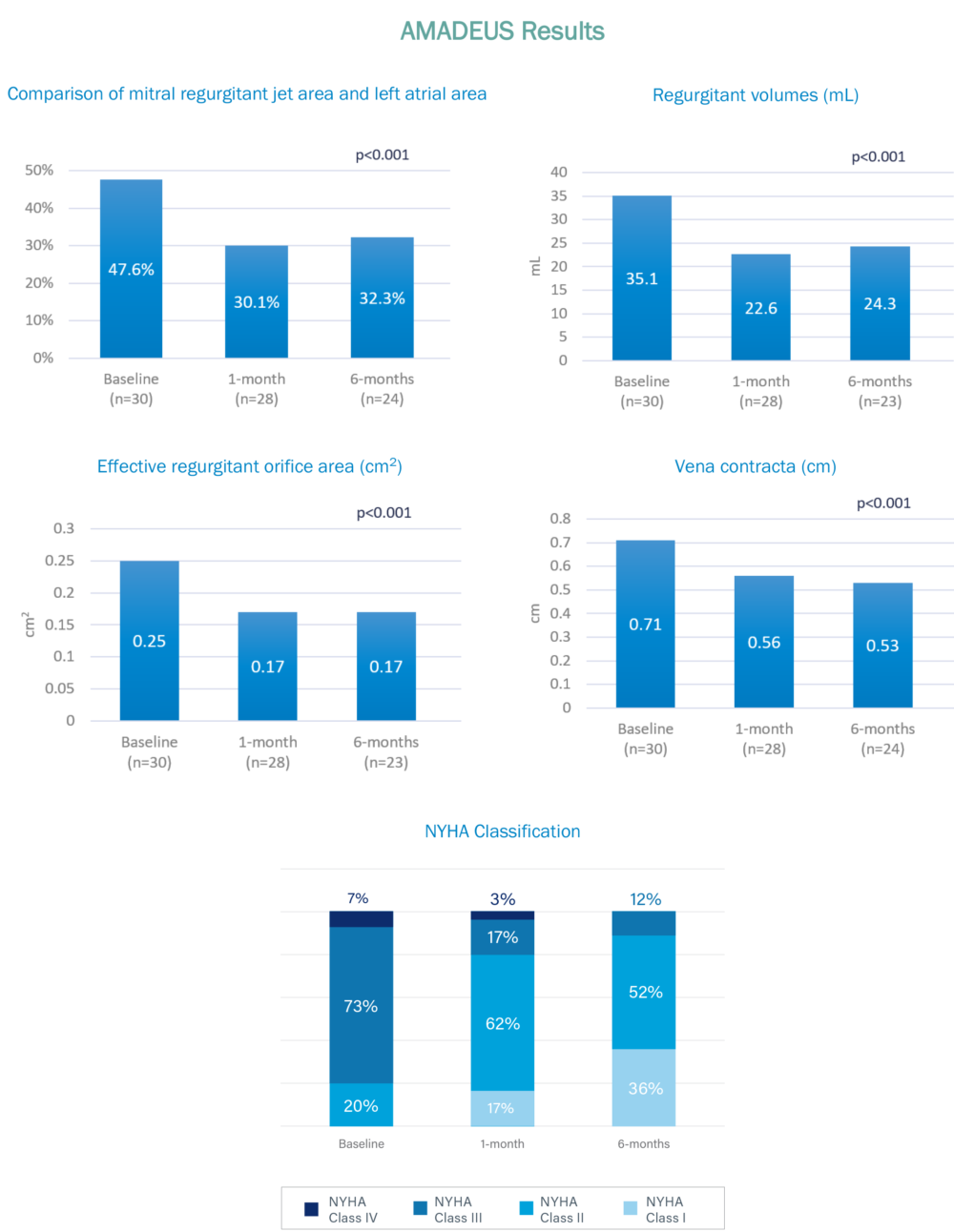 NOTE: The Carillon Mitral Contour System has received CE Mark (0344) and is available for sale in Europe and other countries that recognize CE Mark.

NOTE: The Carillon Mitral Contour System has received CE Mark (0344) and is available for sale in Europe and other countries that recognize CE Mark.